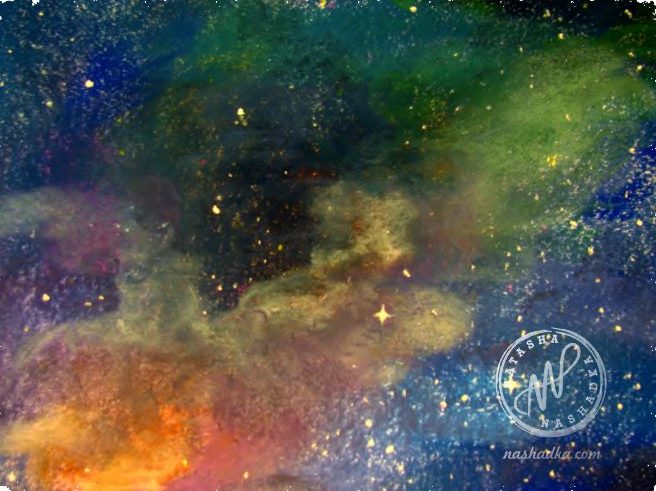 {This is a companion post about the song “I Know My Father Loves Me” written by Sally DeFord. You may want to come back to this after reading the words and listening to the music.}

A collaboration can seem intimidating, especially when you are trying to capture another person’s vision as well as get their approval on your artwork. There is also great joy in the hard work and then seeing it all finally come together.

Inspiration takes time to develop. In the beginning, I remember trying to think of one image that would capture in one fell swoop the meaning of the song. It soon became clear that many more pictures were needed, but even then nothing was coming to mind. After letting my mind spin for a while, I soon had more ideas than I could possibly accomplish. We finally settled on a whopping nine illustrations. What was a dry spell idea-wise turned into a flood.

Initially, there was no image planned for the opening line of the song:

“He numbers the stars and He calls them by name”

As the project progressed it was clear that we needed something simple as an opener. I had seen some amazing photography by my cousin, Jeff Frost, however, we wanted to maintain some consistency with the artwork. I was going to have to draw it. I didn’t want it to be an ordinary picture of a black sky with stars so I began researching the amazing images coming from the Hubble and deep space. What I found were wondrous images of fantastical galaxies and nebulas which looked more like science fiction than real life. What I created was a mere shadow of those glorious skies. 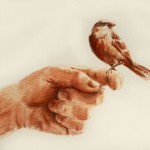 “He watches the sparrow, and the nest whence it came“

This illustration did not come early in the process. I know Sally and I discussed having another bird, specifically one not in flight. All of the drawings except the sky were being done monotone simply because I could whip them out faster. I figured we were getting weary of all the orange so I went with a brown pallette.

I realize now that I should have worked harder to maintain more consistency between all the drawings. As you look through the rest of the illustrations, you’ll see that I’m all over the place: too many different tones and even various colors of paper. I get bored easily so I like new and different, but next time I’ll work harder towards cohesion. 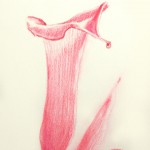 “He cares for the lilies, so lovely to see”

The Lily was a straightforward interpretation as I happened to have a beautiful example growing in my garden at the time. I photographed it early in the morning with the dew still hanging from its lip just as you see here. 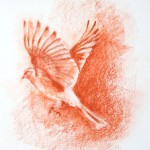 It is the scriptures that give meaning to the use of sparrows in the song:

But even the very hairs of your head are all numbered. Fear not therefore: ye are of more value than many sparrows. (Luke 12:7 KJV) 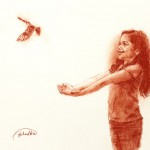 This was such a joyful picture to create. The sparrow is a very clear theme in the song, but I didn’t want to keep portraying one in flight. I really felt we needed to give one some context. A little girl setting a sparrow free.

I had a clear picture in my mind of what I wanted, but I needed a model. I saw the cutest little girl at an activity my daughter was attending (sometimes you just end up in the right place at the right time). However, I needed to photograph her and get a model release without sounding creepy to her mother. I wish I could tell you it went smoothly, but I can’t. It was awkward and took several weeks of emails for the mom to finally sign the paperwork.

Maybe a model release was unnecessary but in this litigious world, better safe than sorry. 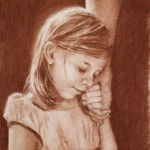 “Because He loves them so, I know He loves me”

Sally told me that she didn’t want to portray God the Father directly because “that would be kinda weird”. We would use Christ as His intermediary (ooh, an added layer of symbolism). My husband became my arm/ hand model in every instance in this song (hey, you use what you got). 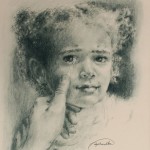 He Will Wipe Away Your Tears

“He numbers the stars, and our tears and our smiles”

If there were going to be tears portrayed in this song, I wanted them to be in the process of being wiped away by Christ. (Think about that imagry for a while!) This is my neice, by the way. She was four or five at the time and did a brilliant job of taking direction for the photoshoot. I wasn’t there (the whole thing was conducted by my sister) and the source material turned out superbly.

After the painting was finished, she looked too sad for being in the presence of Jesus. So I reworked the mouth to give just a hint of a smile: the kind of genuine smile you might muster after a good cry. 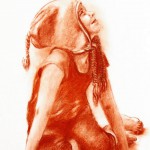 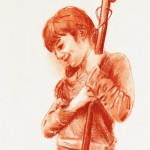 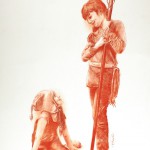 “He watches the lambs in the fold where they sleep

He cares for the shepherd watching over

His sheep He knows His creations, where e’er they may be

Because He loves them so, I know He loves me”

This painting is by far the pinnacle of the whole series and my favorite.  I didn’t want it to be too literal. Yes, it is a shepherd and a lamb, but it is also two children at play. It is an older sibling lovingly indulging her sister’s game. And it is a representation of how we are all emissaries of Christ by how we care for others. 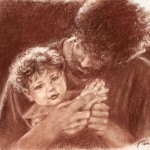 This last one is Christ and his love for us. It is simple and direct.

I cannot really express to you all that went into this drawing, but I can tell you that I didn’t want to do the classical Jesus with long hair.

I think I need to do this one in color.