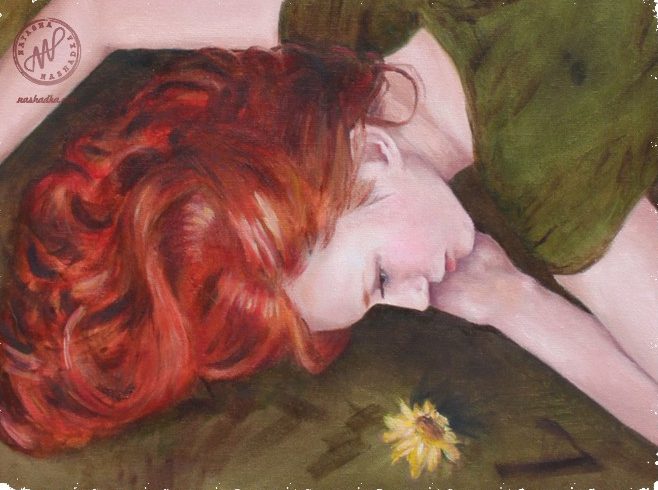 Today’s artful remedy is a little different that normal, but just as likely to bring a smile to your face. It’s an exerpt from my husband’s in-progress book, Life Rules for Nerds: Starting with the Slide Rule.

-Written by Mike Nashadka, the Head Geek In Charge at The Man.

Confessions of an Engineer

But that’s not important right now. What was I talking about? Oh, yeah – engineers and art.

A couple of decades ago, on a triple dog dare, I married an artist.

This was a huge win for me, according to my wife.

I have always been fascinated by her (being an artist . . .well, for being a woman too, but that’s not what we’re talking about).

Artists do strange and fascinating things.

My wife spends tons of time on things that I would never spend time on.

For instance, she used to regularly dye her hair a beautiful fiery red. Not like your average orange/red hair – more like she happened to be standing under some person who just started bleeding red. It was not her real hair color, but she chose to spend time on this to make herself “different”. (I’m guessing.)

(There may also be some canoodling about with paint and brushes, but I’m not sure.)

Different is not always a good thing to engineers.

We are singled out from basically birth for being different – not only is our pocket protector a different color, but we are the only ones wearing pocket protectors.
And apparently having your name on your underwear is not a good thing to your peers.

I never really understood why people need their names in their underwear.

How often do you really get your underwear mixed up with other people’s underwear? Is that the “secret” during the annual holiday “Secret Santa” gift exchange? Is underwear passed around like fruitcake?

There are also some fascinating personal characteristics that all artists share.

Based on my extensive research of the many people that I happen to be married to who are professional artists, their attention spans are ridiculous.

My wife will ask me a question and stop paying attention to the answer before she has finished asking the question. It’s like she is a dog, and she saw a squirrel. But she’s the only one that saw the squirrel . . . because it doesn’t exist.

Also, no surface is safe.

We have four couches in our house (for reasons that I’ll never understand because there are only four of us). Three of us regularly have to sit on the floor because she likes to spread her stuff out to take up the maximum possible surface area.

As I was writing this, I went to the bathroom (I’ll spare you the details this time), and now I have to finish this post standing up.

The point I was trying to make at some point, probably, is that art fascinates us (engineers that is). We are typically very utilitarian in nature, and art is usually about non-utilitarian as you can get.

For instance, I remember watching a concert on TV in the late 1980s because I didn’t have a date that night (or really any night for that decade) and the woman that was singing changed her clothes about 10 times during the maybe 13 songs that she sang.

Those outfit changes are about the only thing less utilitarian than oil paintings. (And it also seems like she really could use her name written on her underwear.)

The fact that people spend so much of their time and effort into making something so beautiful for themselves (and possibly others) to enjoy is amazing.

However, engineers are not likely to be the biggest consumers of art.

Part of us just doesn’t get it. We like art that is easily recognizable and doesn’t take a lot of interpretation.

When I look at paintings by impressionists, such as “Starry Night” by Vincent van Gogh, I can’t help but think that it was really painted by a child and fingers were involved. I don’t really get that.

We also are well-known for having slightly twisted (read: “dorky”) sense of humor, so art with derogatory statements about Microsoft (they typically deserve it) is more our on our level.

Thankfully We’re Not All Engineers.

With all being said, we really appreciate what the artists do. We can’t do it. It’s not our thing. I’m glad that somebody makes the world more beautiful because I don’t know how.

A Loyal Hunting Dog is Worthy of Immortalization

How I Finished Up Cabela, The Hunting Dog
Scroll to top
Send this to a friend