As Christmas quickly approaches, I decided a visual feast to celebrate the season was in order.

Most pieces I’m sharing originated in the Renaissance owing to the fact that as culture emerged from the Dark Ages there was an explosion of religious art. This period, also called the Age of Faith, was so dominated by the powerful influence of the Christian church, church leaders had even more power than kings (a big reason behind America’s separation of church and state).

It was the Church that financed most religious art. Kind of like the world’s first propaganda campaign. While most artists were very limited in their subject matter, they were still allowed to inject their own style, creativity, and symbolism.

(For a few select images, prepare to be dazzled by the Google Art Project’s amazingly high-resolution photos which allow you to zoom in on every brush stroke and crack.)

1. Madonna and Child with Saints John the Baptist and Girolamo by Piccinelli

You can view this at the Google Art Project!

“Madonna with Child and Saints John the Baptist and Girolamo” by Andrea Piccinelli (1486-1524). Google Cultural Institute. Licensed under Public Domain via Wikimedia Commons.

What initially drew me to this painting was the unapologetic support for the breastfeeding movement. Woo hoo! I wonder if it caused as much controversy back then as it does now. Probably not.

The second thing I noticed is John the Baptist (commonly identified in paintings by the cross he holds) who appears here as an old man. Curious. Being only six months older than Jesus, most painters depict him as a child when pictured alongside the baby Jesus.

At first, I was confused about Saint Girolamo since the only one I could find wasn’t made a saint until 1767 (this painting was made around 1500). Finally, I figured out he’s Saint Jerome sometimes known as Girolamo.

Now take a closer look with the Google Art Project at the rock Saint Jerome is holding and you’ll notice what looks like blood. I couldn’t find any information on this symbolism, but my husband suggested it was the rock used to circumcise Jesus. Eeh. *See Luke 2:29.  🙁 If you have a better suggestion, please let me know.

2. The Virgin and the Child or Madonna of the Book by Boticelli

Look at the filigree on the Google Art Project!

“The Virgin and Child (The Madonna of the Book)” by Sandro Botticelli.  Google Cultural Institute. Licensed under Public Domain via Wikimedia Commons.

This one caught my eye because of the brilliant blue of Mary’s cloak. At the time, blue of this intensity was made from the expensive stone Lapis Lazuli so it was reserved for the most important figure. Mary was quite often identified by this blue.

This painting abounds with symbolism: the cherries represent the blood of Christ, the plums are the love between Mother and Child, and the figs symbolize the Resurrection. I was intrigued by the emblem on Mary’s sleeve, but it’s meaning is left up to the viewer.

If you take a moment to look at the painting in the Google Art Project, you can get a good look at Christ’s hand. On his wrist is a golden crown of thorns alluding to his Crucifixion. In his hands are three little arrows. I was a bit confused here until it’s explained that these are nails. Clever.

3. Mary Enthroned with Child by Fabriano

See it in the Google Art Project!

“Mary Enthroned with the Child, Saints and a Donor” by Gentile da Fabriano. Google Cultural Institute. Licensed under Public Domain via Wikimedia Commons.

As I mentioned previously, Mary was often clad in blue. Sometimes it was red, but here it’s black. She looks like she’s attending some kind of funeral. Maybe the artist is hinting at the events yet to unfold.

Several symbols lurk in this painting. The cross at the bottom left probably represents John the Baptist, but take a closer look at what hides underneath the woman’s foot. I have no idea what it is or what it means. An astrolabe maybe?

My husband, always the joker, wanted to know what was up with all of the demons in the trees. Angels, honey, angels.

4. Virgin and Child by Sirani 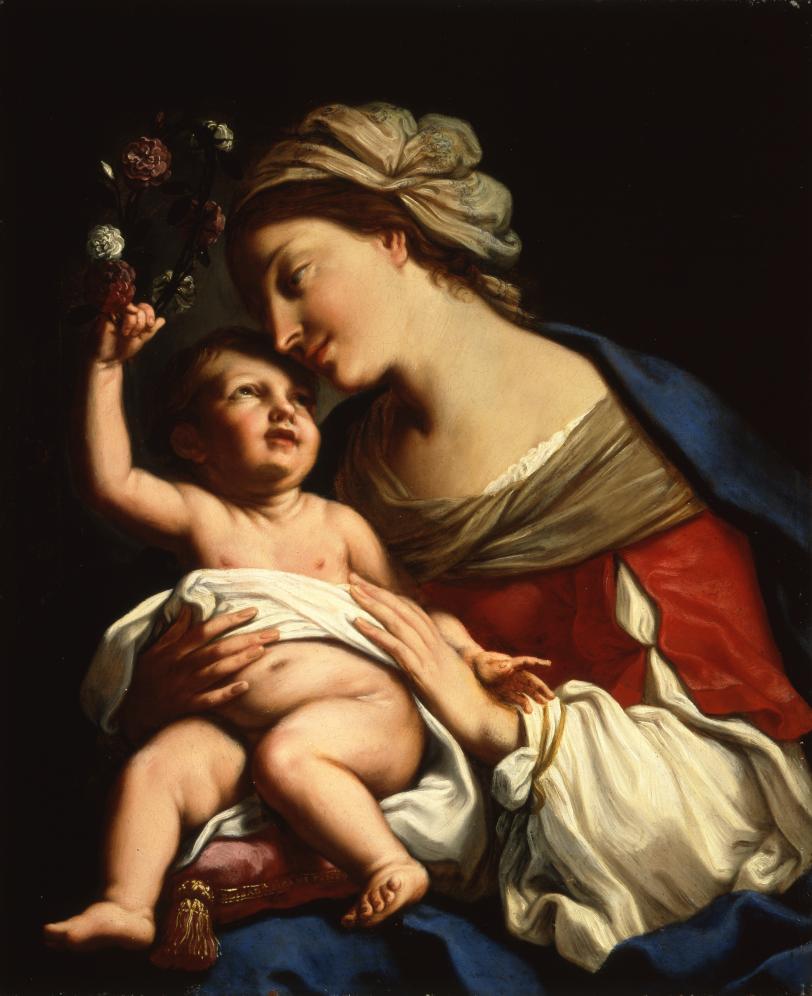 “Virgin and Child” by Elisabetta Sirani (1662)- National Museum of Women in the Arts. Licensed under Public Domain via Commons.

Of course, I selected this painting because it is gorgeous, but also because it’s one of the rare ones from this era painted by a woman.

I especially love the adoring look Christ gives his mother as he crowns her with flowers.

See if you can find the artist’s signature using the zoom feature in the Google Art Project! Plus, if you really want to be freaked out, look at Mary’s fingernails.

5. Adoration of the Magi with Saint Anthony Abbot

Check this one out on the Google Art Project!

And now for something completely different…

It’s the colors that make this piece so exciting – like it could have rolled out of the late 60s. The heads, too, are painted so they look like they’re not correctly attached to the bodies in a surrealistic manner.

You can tell which one is Saint Anthony because of the pig at his feet. Interestingly, there is no direct connection between pigs and his life. Pork lard was often used to soothe skin problems. Saint Anthony healed people with skin diseases. Pigs were used symbolically to represent this skill, but then it morphed into him becoming the patron saint of hogs and swineherds.

Did you happen to notice who has a halo and who doesn’t?

6. Saint Mary (the Blessed Virgin) and the Christ Child with Saint Dominic Guzman and the Blessed Alanus of Roche

“Saint Mary (the Blessed Virgin) with the Christ Child“. Wellcome Library, London. Licensed under CC BY 4.0 via Wikimedia Commons.

This could have been Pop Art by Roy Lichtenstein. It’s interesting how styles come back around (even unknowingly).

This was probably commissioned by the Dominicans because the two men are of that sect. Dominic Guzman initiated the order and Alanus came 200 years later.

On a side note, I think it’s cool that the dragon from “The Neverending Story” makes an appearance.

7. Madonna and Child with St. John the Baptist

Get close and personal with this on Google Art Project!

“Madonna and Child with St. John the Baptist” by Giovanni Bellini (circa 1430–1516). Google Cultural Institute. Licensed under Public Domain via Wikimedia Commons.

What is with the weird winged heads? Their color scheme looks like a high school craft project. Proof that even Renaissance painters made poor design judgment. The slogan for this painting could be, “Red Bull gives you wings!”

I was surprised to find another breastfeeding Madonna. Maybe it wasn’t as shocking a concept as one might expect from a holy depiction of Christ’s mother. In fact, when I did a search, I found 30 more images of the Madonna’s bare breast exposed to a suckling Christ. Maybe people today need to just chill out.

This painting is also fraught with symbolism we can only guess at: the eggs on the window, the carafe of oil, and the water basin.

9. Saint Mary (the Blessed Virgin) with the Christ Child 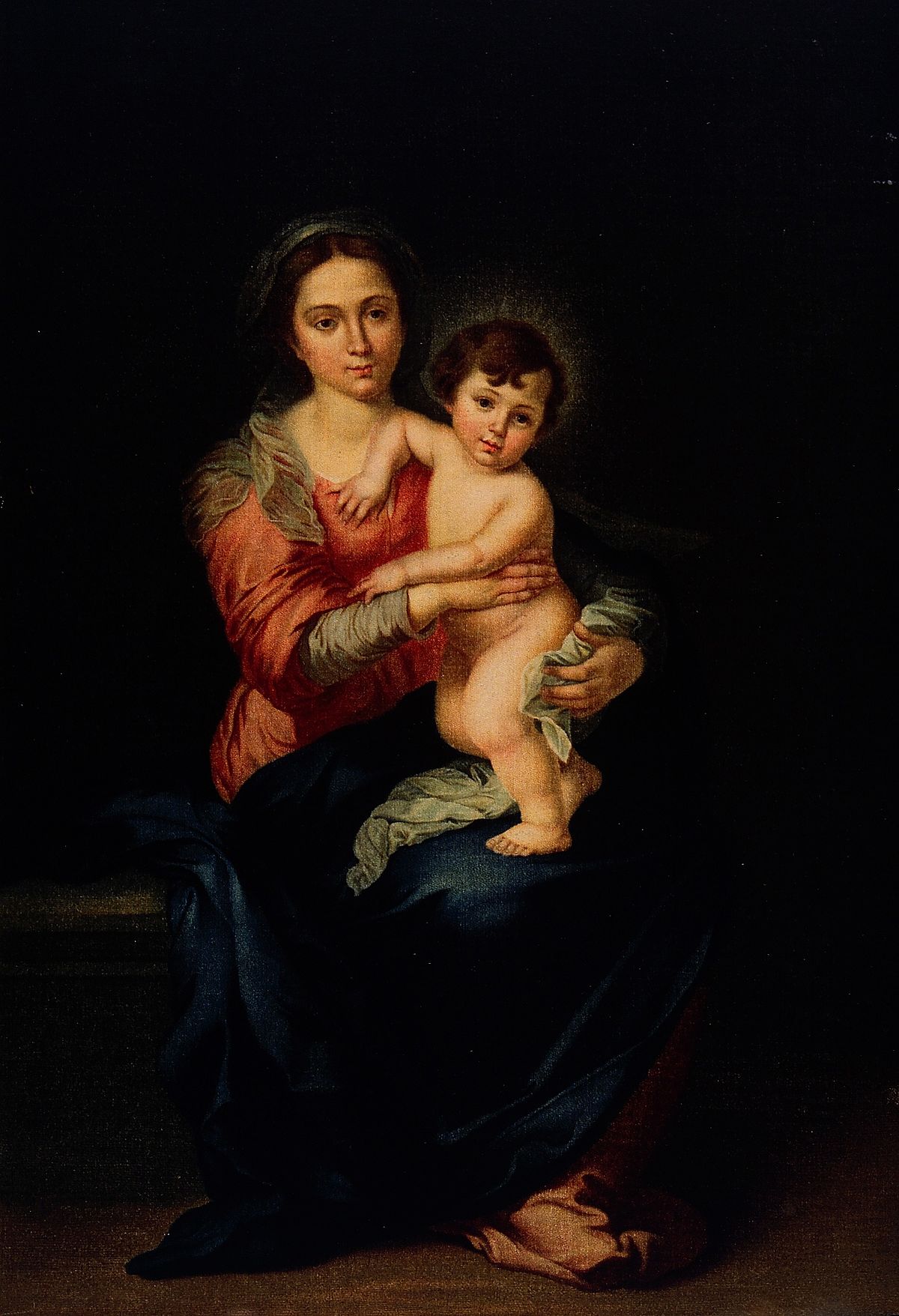 “Saint Mary (the Blessed Virgin) with the Christ Child” at Wellcome Library, London – Gallery. Licensed under CC BY 4.0 via Wikimedia Commons.

Here is another favorite. You can tell I’m a fan of chiaroscuro, the dramatic light and dark made popular by Caravaggio. It effectually highlights the focus and adds drama.

10. Virgin and Child Enthroned by Memling 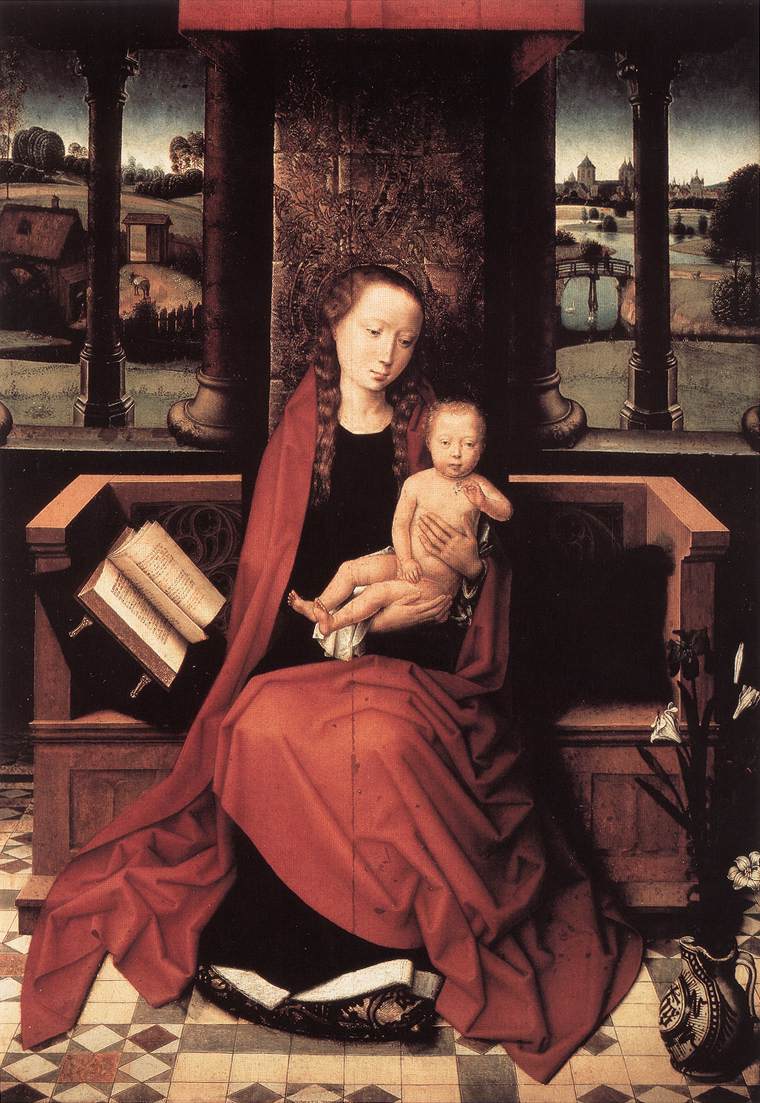 “Virgin and Child Enthroned” by Hans Memling (circa 1433–1494). Web Gallery of Art. Licensed under Public Domain via Wikimedia Commons.

I chose this painting because of the fantastic details. There’s so much exploring to be had in the background. The detail above the throne is as enchanting as it is indecipherable. And the vase has an intriguing pattern that we could see if we just turned it a little.

Incidentally, the white lily makes a frequent appearance in religious art as an association to Mary and her purity. It can also mean the Resurrection.

11. Madonna with the Child, St Anthony of Padua and St Roch by Titian 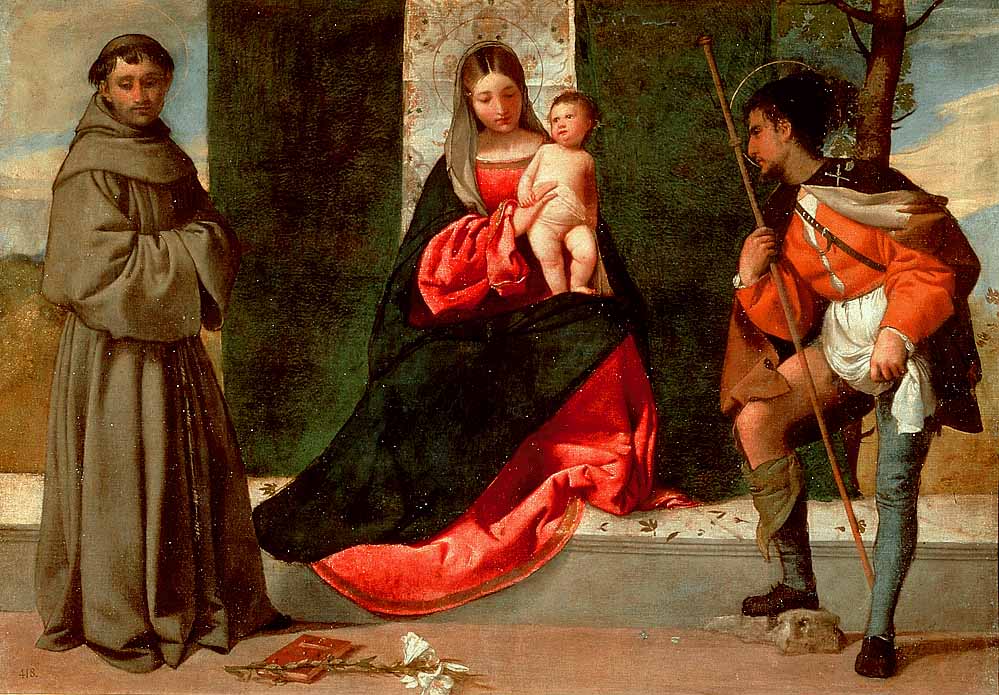 “Madonna with the Child, St Anthony of Padua and St Roch” by Titian (1490-1576). Licensed under Public Domain via Wikimedia Commons.

While at first glance it appears there might be an indecent proposal going on here, the half exposed man is Saint Roch. A search on him turned up numerous naked leg depictions, but it was a little difficult to find out why. Apparently, the exposed leg was to show his affliction with the bubonic plague because the bulbous wounds were often found on the legs of victims where flea bites were the worst.

During Saint Roch’s affliction, he was miraculously fed by a dog and supposedly his wounds were healed by the dog’s licks. As this legend spread, he became the patron saint of dogs.

The other man is not depicted with a pig so it’s not immediately clear that he’s Saint Anthony. I guess you just have to take their word for it.

12. Madonna with Child by Bonati

Another one you can see on Google Art Project!

I swear I didn’t notice this was a breastfeeding Madonna at first – it’s very subtle. I was drawn to this painting for its sweet composition. Jesus seems so vulnerable and is cradled in his mother’s protective care.

13. Madonna with Child by Landi 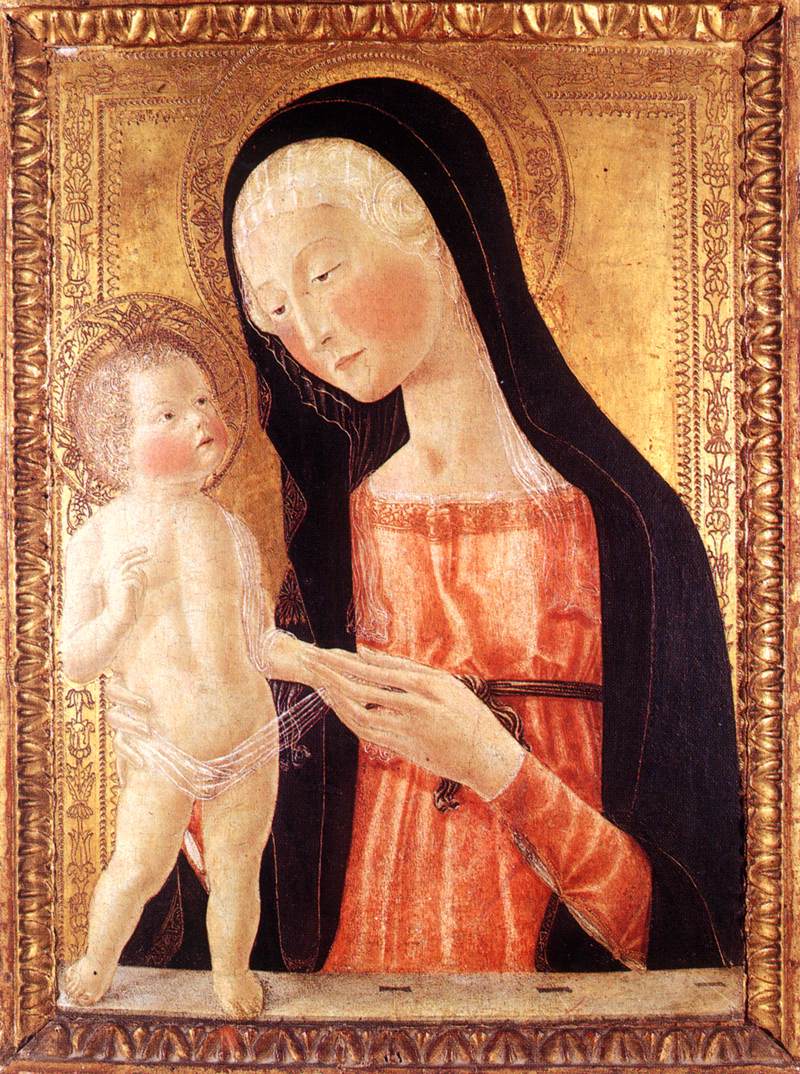 Whoa, I’m really curious about the artist’s proportions. Mary’s head is so large she’d fit right in a Tim Burton movie. I wonder if this was a design choice or a mistake.

I also want to point out something that was very common at the time – the characterization of the Christ Child as not a baby but a miniaturized man. It makes the who immediately recognizable, but a bit disconcerting as well.

14. Madonna Enthroned with Child and Saints by Bordone

This one needs exploring on Google Art Project!

“Enthroned Madonna with Child and Saints ” by Paris Bordone (circa 1530). Google Cultural Institute. Licensed under Public Domain via Wikimedia Commons.

I just have to say, despite the fantastic composition, what the heck? Who is the figure tied to the pillar with the arrow in his side? Initially, I entertained the idea that he was a portrayal of Jesus later in life but ruled that out. Jesus’ side was pierced by a sword, not an arrow. And the pillar and string don’t work either. If you have any thoughts on the matter, let me know.

Again, what is with the winged heads?

This is a really fun one to explore on Google Art Project. There are some surprising objects that don’t belong with the painting. I don’t want to give it away so take some time to look at it closely.

I hope you had fun with this – I know I did. Tell me what mysteries you’ve uncovered!

10 Fabulous Gift Ideas for the Artist in Your Life

What Does a Year of Painting Look Like? 2015
Scroll to top
Send this to a friend